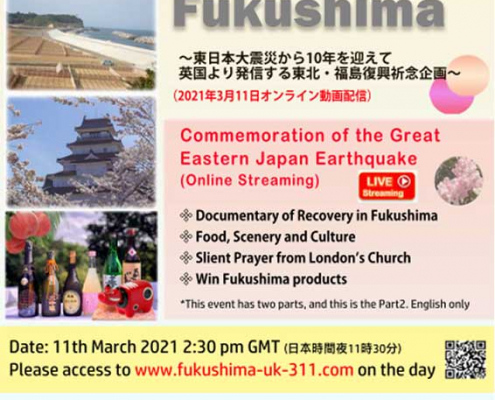 A decade of Recovery in Fukushima and Tohoku

A memorial online event from London

On the 11th March 2021, exactly 10 years since the unforgettable disaster in Tohoku, the Fukushima Prefecture Association headed by Mr Yoshio Mitsuyama organised a memorial event online from London. Rie Yoshitake, as a Fukushima Tourism Ambassador, co-hosted a one-hour programme and presented the Fukushima sake promotional video Sake Wonderland Fukushima. The online broadcast reached an audience of thousands all over the world including Japan and the UK. The programme was composed of various short videos and showed the journey of Fukushima after the disaster as well as encouraging messages from Mr Eddie Jones, Lady Victoria Borwick, Torayasu Hotei and the Mayor of London’s Royal Borough of Kensington and Chelsea Cllr Gerald Hargreaves.

Sake Samurai UK has been working to help the recovery of Tohoku and Fukushima with numerous events and sake promotions over the last ten years and would like to keep supporting the region which is striving to produce great sake for the world. Fukushima has been holding the Japan’s No1 sake producing prefecture for the 7th year in straight succession, and also produced two IWC Champion sake despite the hardship.

Sake & The Incredible Power of Koji