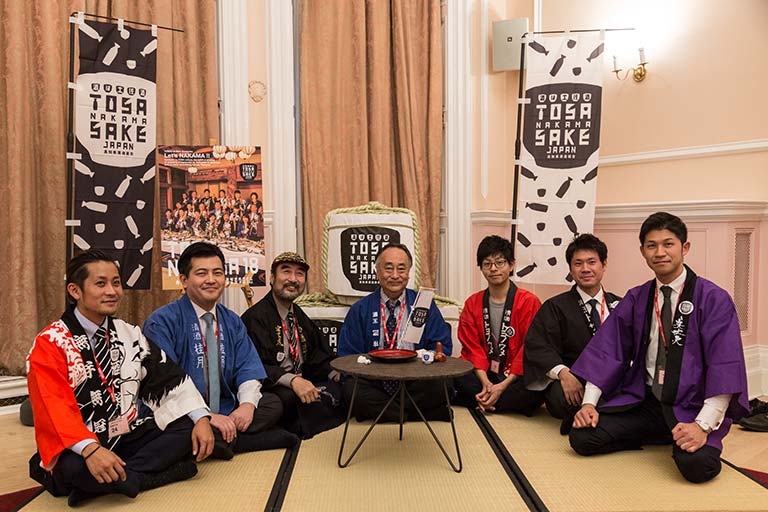 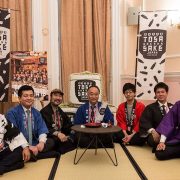 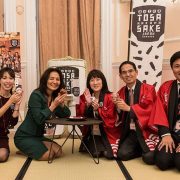 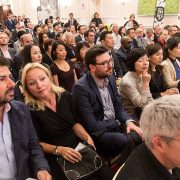 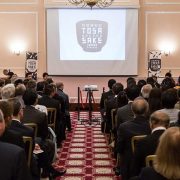 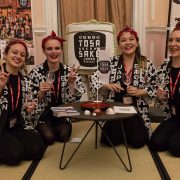 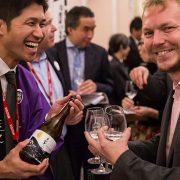 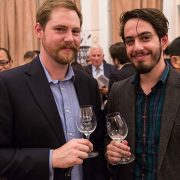 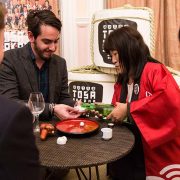 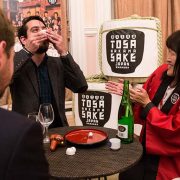 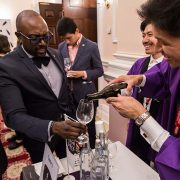 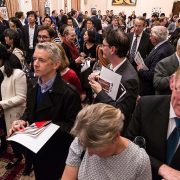 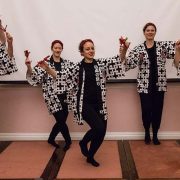 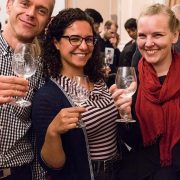 To continue the sake crusade, on the 19th September, seven sake makers from Kochi came back to London to promote Tosa sake with the flag of ‘ NAKAMA’ ; they were Bijofu, Tosatsuru, Akitora, Keigetsu, Toyonoume, Tsukasabotan and Mutemuka.  This was the third official event Kochi prefecture hosted at the Embassy of Japan showcasing the best of Tosa sake and food culture to London’s trade and sake lovers. Under the theme of ‘Nakama’, the quintessential spirit of hospitality and solidarity central to Tosa drinking culture, the sake makers and guests mingled together and enjoyed singing and dancing in Tosa style.

Since Tosa sake fair started in London, the growth of sake export to London has been remarkable.  The passion of sake makers and the style based on ‘ tanrei karakuchi’ and their very unique character such as Yuzu-shu, deep sea water sake are well received in the UK market.  Kochi Prefecture and sake makers should be very proud for their efforts as a team to raise the profile of Tosa sake, as well as their own individual brand name.

At this oversubscribed event, our lucky guests were delighted to discover Tosa sake’s purity and elegance, and enlivened by the joyful spirits of our Tosa sake ambassadors, who came to help us navigate a new frontier of sake.

Kochi Prefecture, once known by the feudal name of Tosa, lies along the Pacific coast of Shikoku in the South of Japan, at the southernmost limit of sake production. It is where we can find the liveliest sake culture and where a passion for the quest to create new sake continues to burn. Tosa sake has a very unique terroir, blessed with the purest mountain water, the longest hours of sunshine, unique local sake rice varieties and original ginjo yeasts. These yeasts manifest their uniqueness through distinctive apple and banana flavours in the finished sake. The history of sake making and the sake loving culture of Tosa stretches back over 1000 years, and the sake is widely known for its ‘tanrei karakuchi’ character, which means ‘crisp, light and dry’ – a perfect accompaniment to meals that one doesn’t tire of drinking!

Following the grand event at the embassy to promote Tosa sake as a team, the individual sake makers organised unique sake events named ‘Tosa Night’. They were held at their client restaurants in collaboration with their UK importers.  These synchronised Tosa events successfully strengthened the relationship between sake makers, importers and restaurants. They were as follows:

3) Tosatsuru & Tsukasabotan: ‘The Moon and the Crane of Tosa’ – Sake tasting at Hedonism Wines