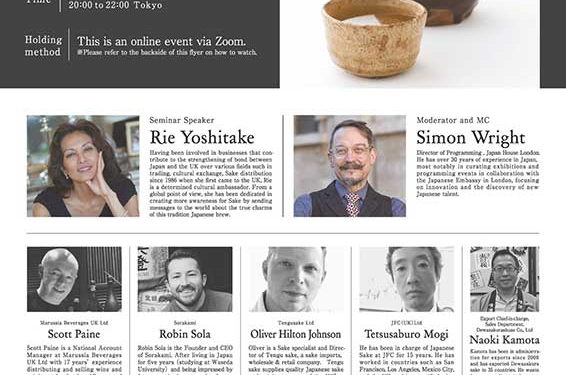 Why Sell Sake in the UK?

In partnership with the National Tax Agency of Japan, Japan House London commissioned an exciting trade webinar to vitalise the UK sake market. The event was divided into two parts. Rie Yoshitake, the leading sake ambassador in the UK, delivered a lecture focusing on the thriving export of sake and the UK market’s transitions, characteristics, trends and prospects. Two sake makers, Kamoizumi and Dewazakura, also joined from Japan and shared their experiences as pioneers in the UK market.

In the second part, a panel discussion was comprised by leading experts from the sake and wine business in the UK. They were divided into three categorical groups of current sake and wine dealers, and future sake entrepreneurs. Asami Tasaka, Tetsusaburo Mogi and Oliver Hilton Johnson all described difficult times after the pandemic froze most of their restaurant business. On the contrary, Ray OConnor MW, Peter MaCombie MW and Scot Paine described their thriving wine and sake distribution business during Covid-19, and clearly made a contrast with those restaurant-based sake importers who have been suffering. Lastly, Robin Sola, Chris Ashton and Rie Yoshitake presented underlying distribution and promotion problems and suggested some solutions to move forward. This meticulously arranged event was truly meaningful for the analysis of the UK sake market and also to unite the souls of sake trade for a bright future.

Watch a recording of this event

A panel discussion for creating sake tourism in Miyagi & Tohoku

Sake & The Incredible Power of Koji
Scroll to top