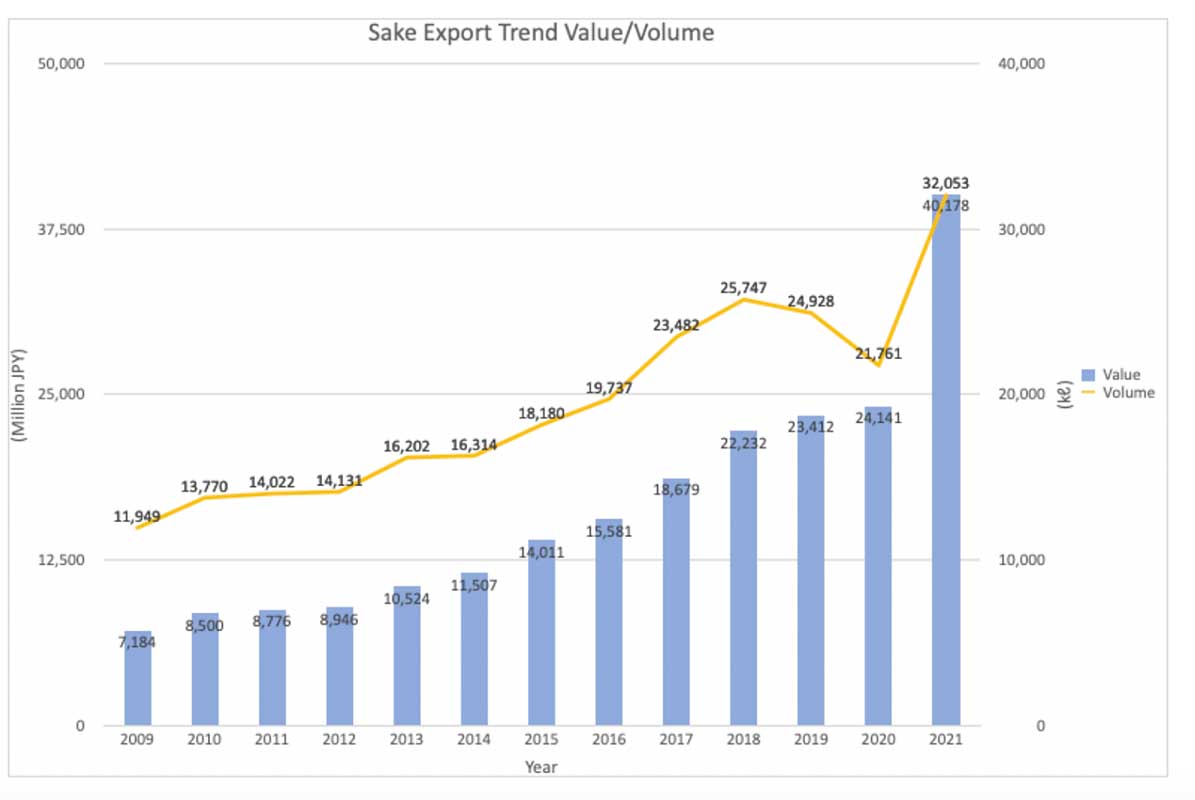 Overseas market growth of sake and other Japanese alcoholic beverages

According to a study by the Japanese Ministry of Finance, exports of sake reached a new record high for the twelfth consecutive year in terms of value. On a volume basis, exports totalled about 3.7 million cases (8.64 litres), and the value exceeded 40 billion yen for the first time. Year-on-year growth in volume and value was 147.3% and 166.4%.

Domestic consumption is decreasing, with the pandemic accelerating this tendency even further. The export value of sake has also decreased but only temporarily; it has started to recover since August 2020 and the overall export value in 2020 has exceeded that of 2019.

The sake market is steadily growing. The export value of sake has increased 4.5 times in the past decade.

Other Japanese alcoholic beverages are growing their market too. In 2021, Japanese whiskey exported 46.2 billion yen to 59 countries, an increase of 170% over the previous year’s total. The export value of gin is about 3 billion yen, or 174% of the previous year’s total. The value of shochu was about 1.8 billion yen, about the same as the export value of gin in 2020. Since shochu is included in the WSET’s spirits text, it is expected that its consumption in bars as a cocktail base etc will increase overseas as education progresses.

It’s obvious that Japanese alcoholic beverages will continue to expand their sales worldwide. Likewise, the Japanese government has announced that they will focus on sake, whiskey and shochu as prioritised items, and will continue promoting those beverages in the targeted countries.

We are extremely pleased to see the healthy growth of sake over the years, thanks to the continued efforts to promote its qualities by its makers, distributers and Japanese government.

Toasting the recovery of the Tohoku Sake Industry
Scroll to top